I hope everyone has had a good week and is looking forward to the weekend. It will be a quiet one on sport this weekend as the finals took place for Wimbledon and the World Cup last weekend, so can finally get back to some normal TV.

Earlier this week the new employment stats were released for the period of March – May 2018. So for the blog this week, we will be looking into the stats and how much they have changed in the last quarter and against last year’s.

Figure 1: The graph shows the quarterly and annual changes in the number of people in the UK market. 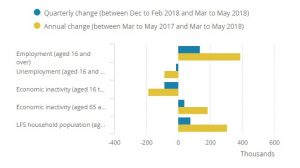 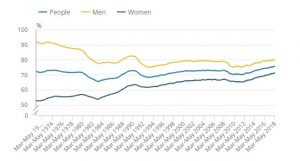 The latest stats have also shown that the average weekly earnings for employees in Great Britain (adjusted for price inflation) increased since July 2017 by 0.4% excluding bonuses and by 0.2% including bonuses.

Over the past few years the employment rate is rising, along with the unemployment rate declining, which is great to see. Things are going in the right direction and we are seeing more people being in work every quarter. It will be interesting to see if this continues into the next quarter and if they improve going into 2019.