We’ve had a very productive week this week and since the small changes that were made around the office (mentioned in last week’s blog), both Alex and Ellie have settled into their new positions nicely and have got stuck into the new work. How has everyone else’s week been? Have you been applying for any of our open roles? Don’t forget to check our website every day, as we receive new roles daily.

The unemployment rate did not change much at all to the earlier months last year, remaining at 4.3%. This quarter we actually saw the number of people economically inactive drop by 79,000 totaling 8.73 million. 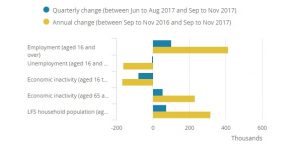 Also looking into the Public Sector stats (as the majority of our roles are through the public sector) since the last quarter there are 19,000 more people employed in the public sector and 21,000 more than the previous year.

Have a great weekend!